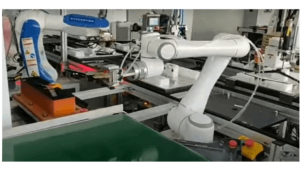 Since the early 60s, manufacturers have been using industrial robots to automate their manufacturing processes. Nevertheless, along the way, while providing an undoubted productivity boost, industrial robots have also gradually shown several limitations and pain points.

Apart from being unsafe for workers, and thus requiring specific safety measures within their working area, industrial robots are also exceedingly expensive and difficult to set up and redeploy, which often make them a burdensome investment, especially for SMEs.

Thus, the cobots, a new generation of robots, have rapidly made its way into the manufacturing industry and reshaped the whole robotics world. Cobots are more cost-effective, more ergonomic, quick to set-up and redeploy and can work alongside humans with no need for protective fences.

Despite this, industrial robots are still a MUST for some specific tasks, for instance when requiring high payloads, very high speed or extreme accuracy. In such cases, manufacturers still have to necessarily turn to industrial robots for their automation needs.

However, cobots can still be deployed for other related processing tasks, also within the same production cycle, giving rise to an almost “complementary” relationship between industrial and collaborative robots.

The below picture taken from an automotive plant clearly show this relationship: while the high-payload industrial robot is in charge for loading & unloading the cars center stack, EC66 ELITE ROBOTS collaborative robot works at the same workstation for screw-driving.

The flexibility offered by Elite Robots cobot allowed the end-user to flawlessly integrate it into his original workstation and expand it, with no need to change its layout, thus making the automation process more compact and simpler.